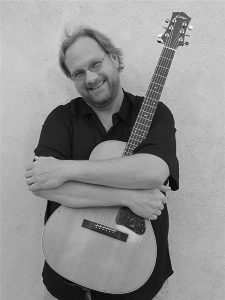 Marvin Dykhuis is originally from Racine Wisconsin. There He started his musical career playing Clubs and Colleges throughout the Midwest with Blues Bands Marvin and The Dogs(“Live At Georges”) and Folk groups Paffrath and Dykhuis(Everybody Knows,Listen). In 1986 he relocated to Austin Tx. and soon became a part of the rich music scene there. In 1988 he began working with Singer/Songwriter Tish Hinojosa and has been her “right hand man”, playing on all of her recordings as well as producing and writing with her. Marvin spent 8 years playing Wednesday night’s Sitting and Singing for Supper with the Threadgill Troubadours (Co-fronting the band) along side the late Champ Hood. He has been around the Globe with Ms.Hinojosa and other Texas based groups playing guitars, mandolins, banjos, Etc.

Marvin has produced and played and sang on many records for Texas Singer/songwriters and groups offering a unique sound to their music. His Chomeleanesque aproach is always welcome in the studio doing movie soundtracks or performing live. From Blues to Bluegrass He’s there with an interesting twist.

Marvin was proud to release his first solo recording in July of 2009. “My House” is a blend of co-written songs and favorite covers. As Marvin’s usual “MO”, this C.D. shows the many styles and musical interests that make him the performer that he is.